The Honourable Mary Montagu-Scott DL became Patron of Oakhaven Hospice on 30 November 2021 and takes over from Lady Mary Fagan LG DCVO who has served in this role since the hospice’s early days. The appointment comes as Oakhaven commences the celebration of 30 years of providing specialist end of life care to those in the community it serves. 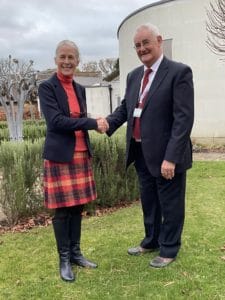 During Lady Mary Fagan’s patronage Oakhaven has grown substantially, evolving its services with community teams reaching out to support individuals within their own homes as well as our wellbeing services which offer support and advice to those affected by illness.

As we approach the 30th anniversary of the hospice, it is fitting the baton will be passed on to such a recognisable personality in the community. Mary Montagu-Scott brings a wealth of experience and knowledge to the role. As a well known figure in the region and champion of so many charitable causes, Oakhaven is delighted to have her accept such an important position.

As the baton is passed Lady Mary Fagan says “I cannot imagine anyone better than Mary Montagu-Scott to take over the reins, I have known her for many years and was delighted to suggest her for the role and even more pleased when she accepted”Mary Montagu-Scott says: “I am delighted to accept this role at such an exciting time. Oakhaven is going from strength to strength in reaching people and their families across the New Forest, Waterside and Totton communities. I am excited to see where Oakhaven goes next to help more people in need of care. Anything I can do to help will be an honour”